We had an ice storm a few weeks ago and lots of snow since. The trees are heavily loaded and are snapping in half over the trail left and right. I've started carrying a swede saw, tiger saw and an axe in my sled. Parts of the trail look like tree carnage, fresh fallen spruce lining parts of the more heavily forested routes. All the trail users on our system have been busy cutting as new trees fall several times a day (!). Kinda annoying, but I guess sometimes the musher needs exercise too.

We had such a good time on Day 2 of the race! I was more confident the dogs could handle the distance, it stopped snowing about two hours into the race (it had been snowing almost non-stop since Friday), the sky cleared up, and a good time was had by all, mushers and dogs alike. The race started an hour earlier on Sunday, which meant we were able to complete the whole run in daylight, which is always nice. I really enjoyed the race trail. Once it stopped snowing, I was able to look about and soak in the scenery. It is really gorgeous out in the Big Lake swamps. The trail followed a part of the old Iditarod trail, a fun, twisty track that winds through lakes and beautiful snow covered birch forest until it drops into the long straight section lines that run through the Susitna River drainage.

* had never run 52 miles before this weekend

The dogs I had concerns over after Day 1, Ruby & Goofy, seemed fine in the morning. I let Ruby run around the dog lot before I loaded her and didn't observe any signs of soreness, just her regular goofy antics. Goofy still seemed a little tired, but then almost pulled my arm off on the way to the dog truck, so I figured he was fine. The dogs were a little more toned down off the starting line on Day 2. After about 15 miles, they warmed up and started rolling. After 20 miles we hit the slog on the section lines-big snowmachine highways with terrible churned up trail, and after 25 miles, Flathorn Lake, which had blown in and Cim had broke in by dog team just that morning. They powered through it all awesomely. Not as awesomely as the Redington & Berkowitz teams, those dogs were impressive to watch as they steamrolled though the sloppy trail, but great for what we have been doing :) Ruby was the super star of the team this weekend. She is so incredibly driven. Head down, working hard, no matter trail condition or incline. There are some STEEP hills on the Iditarod trail! Great training for the dogs; we don't have any hills quite that steep on our local trails. Fritz got demoted from lead and had to watch his brother Nils lead the team with Ruby from back in swing. 52 miles is the longest these boys have ever gone in their life, so I let them each get a turn. Goofy did even better on Day 2 than Day 1. I think he is getting back into the groove of pacing himself for long distances again. Buddy did better Sunday too. Vinnie & Sneezy got tired. The rest were as steady and awesome as they were the day before. Out of 20 teams that started the race, 16 finished. We finished in 15th place overall.

The front runners can of course be congratulated on their wins & fine looking teams, but I'd like to extend a special congratulations to my friend Mary Helwig, who took home the red lantern and the accomplishment of completing her very first race with dogs from her very own kennel. Good job Mary!  And a BIG BIG THANK YOU! to Aurora Dog Mushers Club for organizing and hosting the race. I'm on the board for Aurora so am well aware of how much work went into putting it on, from paperwork, parking lot plowing, to putting in trail, and I am so appreciative of everyone's hard work. Sled dog races can not happen without volunteers! It's fun to follow the mushers, but be sure to thank and congratulate the race organizers & volunteers as well. They work so hard to make these events happen. You can check in with Aurora Dog Mushers via their website and Facebook: http://www.auroradogmushers.net/Aurora_Dog_Mushers/HOME.html  and  https://www.facebook.com/pages/Aurora-Dog-Mushers-Club-Inc/170131633016136

Some info about the dogs I took:  FRITZ, NILS and PETE are brothers and all lead dogs. They are former Rondy dogs and are trying their hand at distance this season. Their other brother, Fox, is a lead dog for our neighbors down the road. SNEEZY is a half-brother of these boys (Sire is Cowboy). VINNIE and VICTOR are brothers. Victor ran with me last year, Vinnie is new to distance. I have their other brother, Vader, as well (he was left at home to lead the other 9 dogs who didn't get to run the race on a run today). I tried to get Dad to give me their sister Vixen so I could have the whole set, but it didn't go over :)  RUBY is a half-sibling (sire: Demon) to the V litter, so is MAJOR. BUDDY is out of Echo and Pebbles, which means he is GOOFY's cousin. ROBBER is a Kozy (Kozelskiy of Anadyr) puppy.

Some interesting Siberian history I learned recently: All Siberian Huskies in existence today can be traced back to one of three males (Tserko, Smoky or Togo) on the sire line. Maternally, to one of four females on the dam line. Our kennel is probably one of the only kennels today that still has dogs going back to every single line. Kozy goes back to Tserko.

If you are interested in pedigrees, check out ped.anadyr.com. You can type in any dog's name, click "breeding info" and trace the pedigrees. I know a lot of people following my racing this season have relatives to my race dogs. Suzanne in England, for example, has Buddy's uncle. Major's sister lives in Finland, and Fezzik's mother came from the Netherlands.


I remembered to bring my phone and was able to snap a few shots along the race trail. Don't think the photos don't do the landscape justice...
Posted by Lisbet at 4:21 PM No comments:


We finished 18th of 20 teams with a total time of 6 hrs 7mins. Not too bad, considering our longest run up to this point has only been 35 miles. The dogs went out well. We held to our usual training speed 10-11 mph. After about 25 miles, the trail turned into a slog and our speed dropped. We didn't get passed until after we hit the halfway point at Flathorn Lake. As soon as we made up the bank off the lake, Dean Osmar, Robert Redington, Markus Ingebretsen and Kelly Maixner caught up and roared past. After 35 miles, we completed a 20 mile loop that dumped us back onto better trail. The dogs were a little tired by this point, but steady. We motored on. About 15 miles from the finish line, another group including Kristin Bacon and Ben Harper passed. Grant, Kelly Maixner's handler passed just after Burma Road and Vern Halter caught me in No Man's Land, two miles from the club house. The dogs did really good. 20 miles was a big jump for them. I feel confident they will do well tomorrow. The soft trail on the 20 mile loop should set up a bit tonight, making for easier going, but I don't expect our speed to improve; the dogs will be a little tired from Day 1. I'll take at least nine dogs out tomorrow. Frida decided her head wasn't in it for this distance mushing thing and will be dropped. Ruby seemed a little stiff at feeding and Goofy seemed a little tired. We'll see how they feel in the morning. The rest hopped about and ate voraciously (as usual).

Monday morning. I loaded up 12 dogs and headed to Talkeetna to run dogs with my friend Anja.  We did a nice thirty mile loop, running along the Spur Road, crossing driveways, past giant satellite dishes, and onto a fine winter trail that takes off from the end of Comsat Road. -20F, winter sunlight filtered through the tops of the trees, the trail was twisty and hilly. We crossed two small creeks, went across a footbridge, and I saw one of the biggest cottenwoods I've ever seen in my life. We dropped down onto Fish Lake for an extra two miles on our way back. The skies were clear and at the far end of the lake we could see the jewels of the Alaska Range --Denali, Hunter, and Foraker-- dominating the landscape. Back again to the kennel, kibble treats for the dogs, hot cocoa for the girls :) 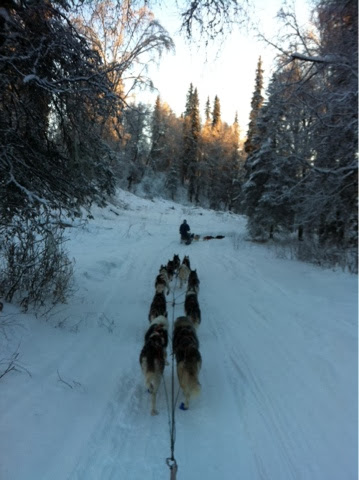 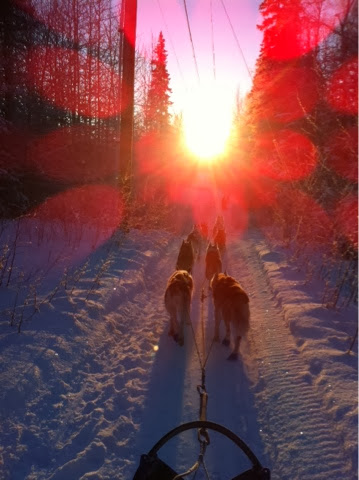 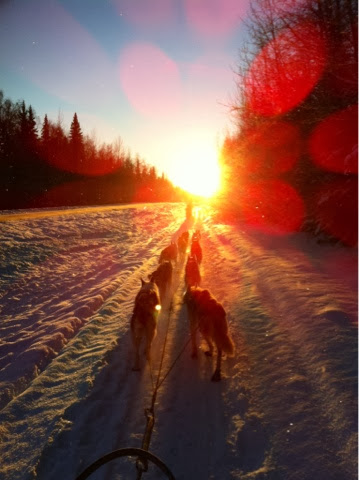 Posted by Lisbet at 6:49 PM No comments:

sunset at the kennel

A long overdue training report coming soon, with updates on progress, training, fundraising & the dogs that make up the Iditarod training pool :)
Posted by Lisbet at 2:39 PM No comments: