My three puppies are fifteen months old. They are old enough to work in harness, but not old enough to run with the main team. They will not be finished growing until they are two years old & I don't think its a good idea to run them hard so young. So I have a three dog puppy team this season! They are my designated canicross and skijor dogs :) Bike and I went out for a jog today to check out the neighboring trails. They will not be safely passable until the waterways completely freeze-up. But it's off to a good start! We had a really hard freeze last night that solidified a slow moving creek that was all water yesterday evening. The ice was thick enough to support Bike, but it will be a while before it's safe for the ATV... 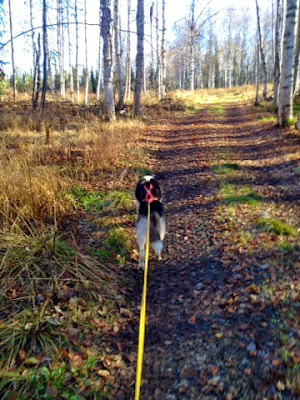 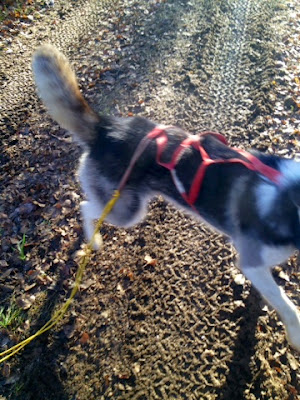 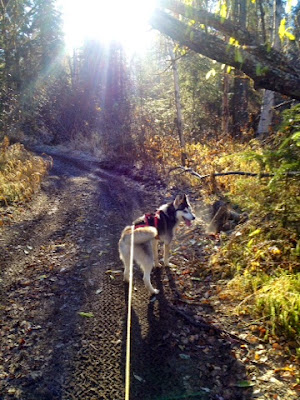 Posted by Lisbet at 5:41 PM No comments:


We left Nikolai after a solid six hour rest. Daylight faded as we trotted away from the village. I had asked some locals about the route prior to leaving and, true as advertised, the run was flat the whole way with frequently changing terrain that wound through sloughs, river, woods, river, swamps, and river. I thought it was great fun.  I was in a good mood & the dogs were looking smooth. We were focusing all our energy forward, towards our big rest. We hopscotched the whole run with John Dixon, a musher from Fairbanks, who was having trouble with his team, plauged by females in heat. They had speed and would pass me quickly, but would invariably ball up and refuse to get going again, frustrating their musher. Midway through the run, Ralph Johansson roared past me. Holy cow, his team looked good. His dogs looked so strong and fresh, they made quite the impression on me. That looked like a top-10 team ripping past, but Ralph had a lot of ground to make up if he was going to catch up with the lead pack.

We rolled into McGrath after an uneventful six hour run. I was so excited to be there! I’ve been to McGrath several times as an Iditarod volunteer, but this was the first time I ever arrived by dog team. My friend Mark Cox was there to check me in. I first met Mark ten years ago when I was a high school student volunteering with the McGrath dog drop. Mark is one of my favorite people to see out on the trail. Heck, I’d be happy to see Mark anywhere. He is a kind man with a great sense of humor, a wealth of backcountry knowledge, and a reassuring presence that has helped the Mcgrath checkpoint run smoothly for as many years as he has been in charge. Mark has a teenaged son, Caleb, who I also look forward to seeing. Caleb has been volunteering for Iditarod since he was a small child. He has grown like a weed in the past few years and makes me feel old, seeing as how I first met him almost a decade ago.

McGrath was chock full of friendly faces. It was particularly nice to see my friends Anja Radano, Shannon Post & Tabitha Jones —- all working as Dog Drop volunteers, aka “Droplets.” McGrath is one of two central hubs along the race trail (Unalakleet on the coast being the second). As soon as it is easier to fly to McGrath than Anchorage, all dogs dropped along the race trail are taken to McGrath, where they are cared for by loving & experienced dog drop personnel until a cargo flight can be scheduled to fly the dogs out. The main dog drop crew, the Droplets, are led by a veterinary technician, and work closely with the trail vets to ensure the dropped dogs get the best care possible. The dogs are priority number 1 on the race trail. All race logistics are scheduled with dropped dogs in mind. They are the first to fly out from remote checkpoints, either before race officials or volunteers, or sometimes on their laps.

Anyway... the McGrath checkpoint is located at the community center. The town parallels the Kuskokwim River, with the community center at one end of town and the airport at the other. We were led to a parking spot on the side of the road that ran along the riverbank. It wasn't the best spot, basically being a ditch full of thorny rose bushes, but it would do. What followed was a constant pattern of sleep, feed dogs, eat, sleep, feed dogs, repeat. Of course, it went by all too soon. By the end of the stay, I didn’t feel like I was back at 100%, but close enough. In between naps and dog chores, I had eaten several times, taken a revitalizing shower, recharged both headlight batteries, repacked my sled, and removed my heavy duty drag mat.

Unlike me, the dogs had gotten a solid 25 hour rest, interrupted only by feedings. They had been eating great. It was a short eighteen miles to Takotna, and another short eighteen after that to Ophir, the last checkpoint before the race trail veered into open wilderness.

Before I left, Anja kindly loaned me her wool hat. I had lost mine after a nasty spill on the ice in the Dalzell Gorge. I had a wool headband, but worried it would not be warm enough for the coastal weather ahead. Turns out it wasn't my ears I needed to worry about.

Coming up: Part VII: Sunrise on the Road to Ophir

Missed the first few installments of my Iditarod story?

Elin Beate & Trine are two girls from Vågå, Norway; the small Norwegian town where my mom grew up. For the next three months they are on a big round-the-world trip: USA- AK- Peru - Tanzania. You can follow their adventures at their blog: http://budeienepaeventyr.blogg.no. It's in Norwegian, but you can get the gist from the pictures. Two teenage girls having a good time :)

While they were here in Alaska, we ran dogs...

We drove to Denali...

THANK YOU to Sally Hess for sponsoring the Iditarod checkpoint of Eagle Island! Sally sponsored Eagle Island for her grandkids: Sidney & Ryan. Sidney is named after her great-grandmother Sidney Maxwell, a wonderful woman, who is my grandmother's best friend. They have been friends for almost 80 years!

Eagle Island is a remote checkpoint on the Yukon River. The checkpoint, located on the site of a summer fish camp, breaks up the 120 mile stretch from Grayling to Kaltag on the Southern Route of the Iditarod Trail. 62 miles from Grayling, 62 miles from Kaltag. It's on the Southern Route, meaning the race route passes through only every other year, and that when the mushers do hit the river, it's downstream from Kaltag, into the famous Yukon River wind.   According to Don Bower's Trail Notes:

A 1997 musher said that Eagle Island is so remote it’s actually beyond the edge of the planet: it’s as if you've gone to the edge, fallen off, and discovered that the Place Down Below really has frozen over. It’s definitely lonely and always cold. The local wolf packs howl all night to vent their indignation at all of their uninvited cousins intruding on their territory. You can rest assured you and your fellow mushers and checkpoint personnel are almost the only living humans in an area larger than many entire states. If you’re running the race to get away from it all, then this will be your favorite checkpoint. In any case, it’s a welcome respite in the wilderness, and you’ll be more than happy to stop there for awhile. (http://iditarod.com/about/the-iditarod-trail/grayling-to-eagle-island/)

I've never traveled through Eagle Island. I loved the pieces of Yukon River I saw last year; unlike Don Bowers, I never thought it was boring. I'm yearning to hear the wolves howl, and am apprehensive about the Yukon River wind, with wind chills up to -100F.  Last year, the wind was strong, but at our backs. I wanted so desperately to see or hear wolves, like my mother did when she ran Iditarod. In the middle of the night, the team trotting smoothly down the river on the way to Galena, I DID hear howling, carried on the wind.... my breath caught & I strained my ears for more... and I realized it was just Monica's team up ahead.  Still waiting for my wolf encounter. Maybe this year!

Here is a video that shows Eagle Island & some of the Yukon River landscape:

The other checkpoints on the Yukon River are still available for sponsorship:  Anvik, Grayling & Kaltag !   Your donation will help us fill our drop bags with quality kibble and meat snacks for the dogs, handwarmers and meals for the musher, and defray shipping costs to the checkpoints!
Checkpoint sponsors will recieve a signed 5 x 7 picture from the race and an official certificate of sponsorship, signed by Lisbet & lead dog Ruby.

Thank you for your support!  xx  Lisbet & Team
Posted by Lisbet at 3:58 PM No comments: 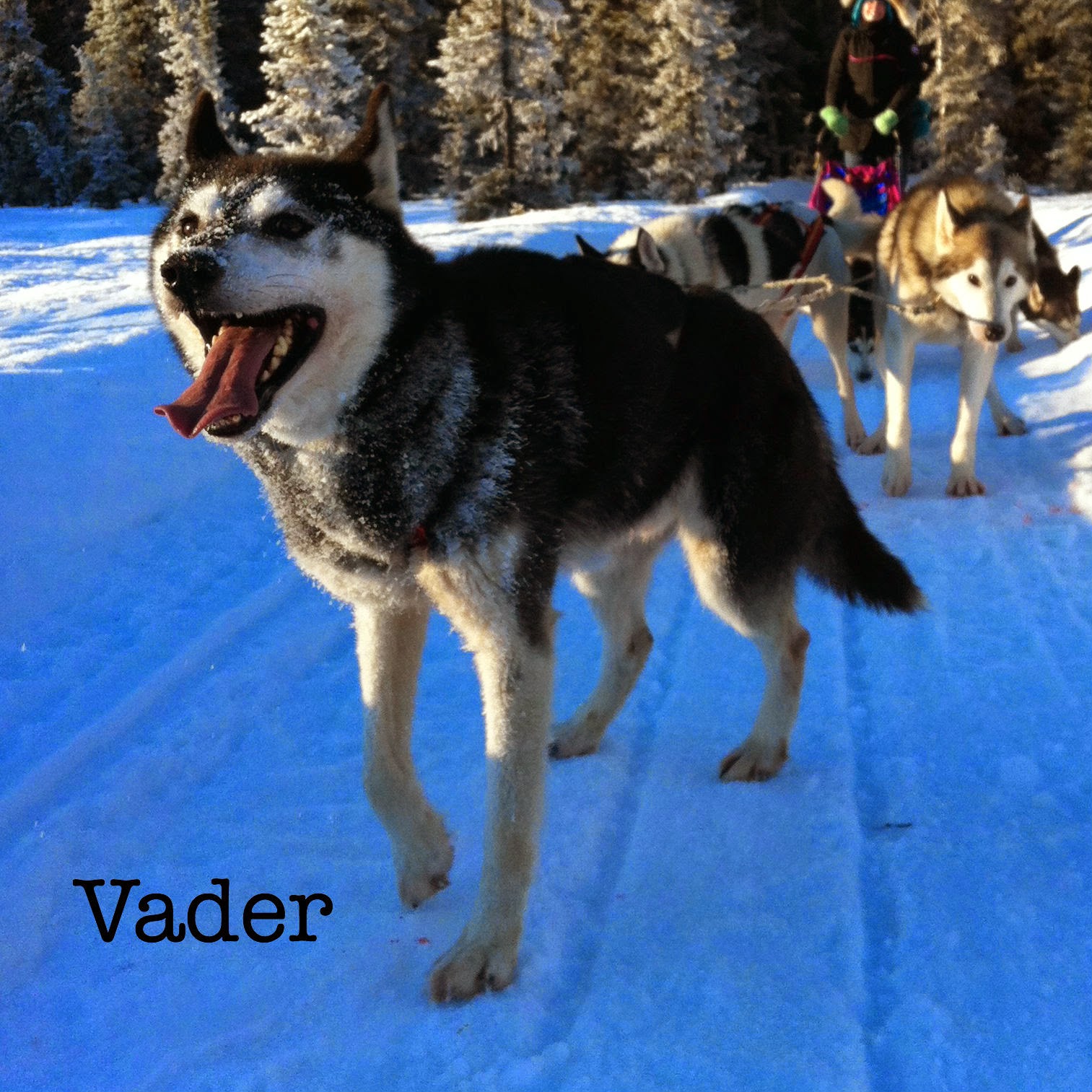 A big thank you to Susan Britt for sponsoring Vader for the 2014/2015 Race Season!

Brother to Vinnie, Victor and Vixen, Vader is the best lead dog of the litter. He helped pull the team under the burled arch in 2014. A dog who more often acts like a big, black kitty cat, Vader is super super sweet and very very eager to please. I luurrvv him !!

Thank you, Susan, for your support of Vader & Team Anadyr !!  xx

Thank you for your support of our 2015 Iditarod !!

Posted by Lisbet at 2:20 PM No comments: