I. The Start
The sun beat down, warm and strong. It was race day. We were parked in the staging area on Willow Lake. While the dogs relaxed, I fluttered around trying to pack my sled bag. I was wound tight and flustered. A film crew checked in with me while I sorted through bags, packing my sled for the first leg of the race. On the resulting video, you can hear the tension in my voice. I can be seen aimlessly pawing through bags, picking things up and putting them back down again, not sure what I was looking for in the first place.
How does a Rookie pack for a thousand miles? First, I had to rearrange some things in my own head. The Last Great Race and its thousand miles of unknown can be intimidating, especially to Rookies who don’t know what they’re doing. So what I had to tell myself was, packing for Iditarod is no different than packing for any other sled dog race. The “secret” to packing for a thousand miles is knowing how to pack for two hundred miles. Packing your sled for a two hundred miler should be old hat! Once I put my race into perspective, it was much easier to pack. Checklists help, too. I had one, but still managed to forget my race ladle. Whoops. Rookie mistake #1. It was less than four miles home, but northbound traffic was so thick running home was not an option. Fortunately, we had packed another ladle in the truck to water the dogs with. It had a rotten wooden handle, but would have to do. (In fact, it lasted all the way until Safety, when I broke it in half stupidly beating it against the ground to knock some ice off.)
The sled was packed hours before my scheduled start time. Could I relax then? No. It was impossible. Veteran mushers, who appeared relaxed, mingling with friends and family, rubbed my back and assured me it was a facade, that nobody relaxed until they hit the trail, and then some not even until Nome. I paced around, stood nervously, tried to eat, changed into my trail clothes, laid out harnesses, and finally, right before hook-up, changed into fresh socks. This is basically my version of putting on a game face. (Clean, dry socks are a priority in my book, and are to be enjoyed as often and as long as possible. Dry feet = warm feet = happy musher. The “suffering in the Great White North" trope is overrated. Gotta take care of yourself to be able to take care of your dogs. I was so fortunate this year; neighbors Scott Brown and Janet Sweeney (who appreciates clean socks maybe as much as I do) generously donated fresh socks for each checkpoint. Two brothers to Scott's lead dog, Fox, were on my team (Nils & Pete). Thank you Scott & Janet!)
Well, socks were on, it was time to go. With the help of my pit crew (THANK YOU Mom, Dad, Franzi, Anja, Shannon, Mike, Mark, Bernie, & Rodney!), the dogs were hooked to the line and precisely at our appointed time of 3:08pm (the logistics of the start are astounding), we left the dog truck to head to the starting line. Due to questionable snow conditions over the Alaska Range, I chose to start with 14 dogs, instead of a full string of 16.
The final fourteen:
RUBY NILS
VADER PETE
FEZZIK VINNIE
SNEEZY MAJOR
VICTOR JACKIE
DOC GOOFY
ROBBER FRIGG
At the line, I guess the dogs were screaming, the announcer booming, and people cheering, but I can’t remember hearing anything... At 3.18pm, the sled holders let go, my loved ones blurred by, and after two years of training and preparation, we were on our way to Nome.

the trees budded out today!  i am soaking up the heat of an early summer (75F today) but my thoughts still run to winter. going through some of the pictures i took on Iditarod, reliving a few parts of the trail:  the glory of full sunshine on the south side of the Alaska Range,  the apprehension and fear of the mountain passes, the sweet relief of a straight snow-covered trail after 30 miles of dirt and stumps……… will be sharing more as the weeks progress….  my computer broke in half a couple weeks ago but i am now back on track as far as my technology is concerned. am working on a major blog overhaul as well…..
happy spring! 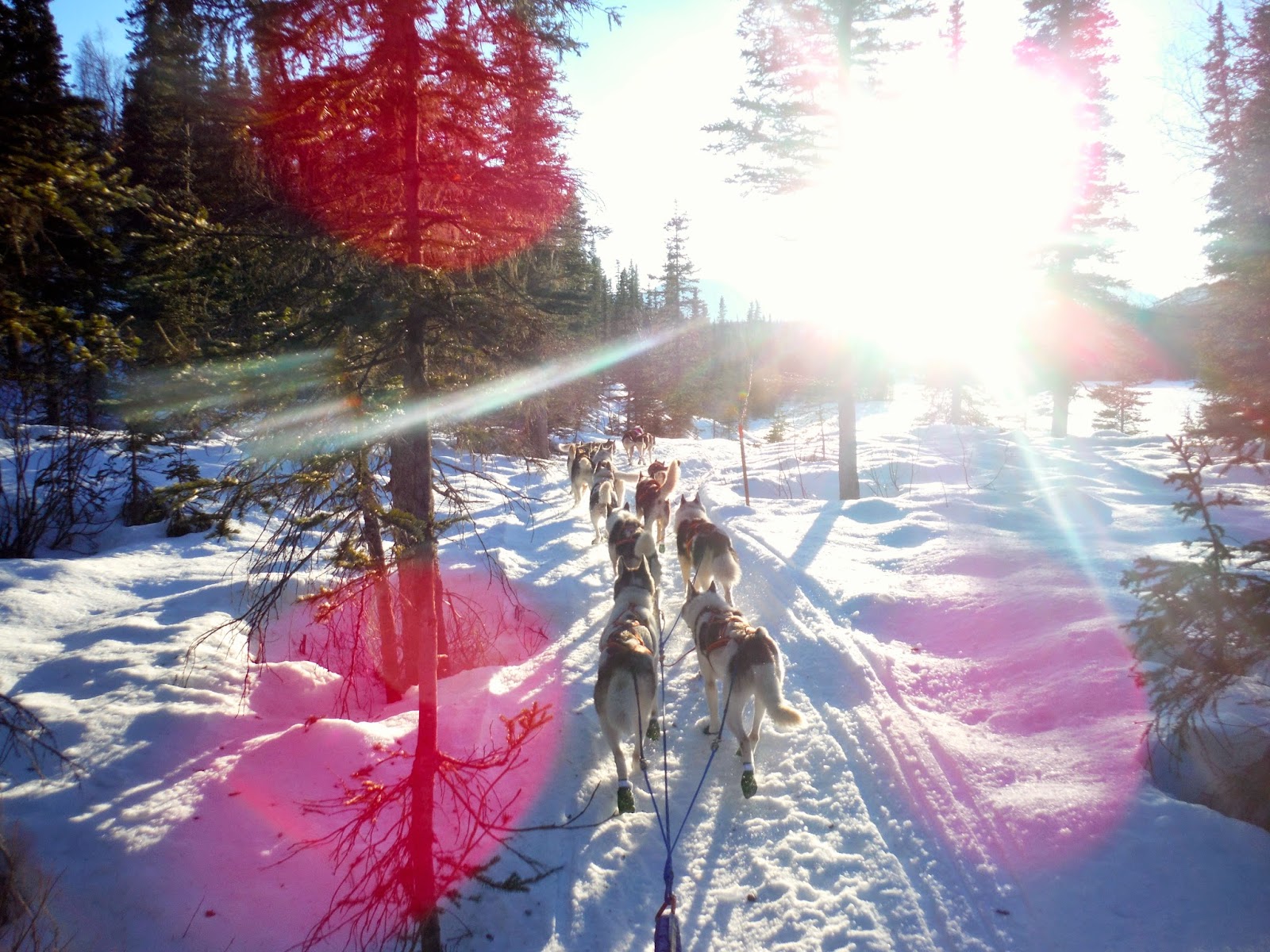 Posted by Lisbet at 3:40 PM No comments: