A big thank you to the Bay Area Siberian Husky Club for sponsoring Papas for the 2014/2015 Race Season!

Papas is a very sweet, energetic boy. Silver-black & handsome, he is always ready to jump into your arms for a hug. He has participated in several mid-distance races and a 100 mile skijor trip with a friend deep in the wilderness of Denali National Park. He is also the father of the Solstice pups, Bike, Mygga & Svidd.

Thank you, Bay Area SHC, for your support of Papas & Team Anadyr !!  xx 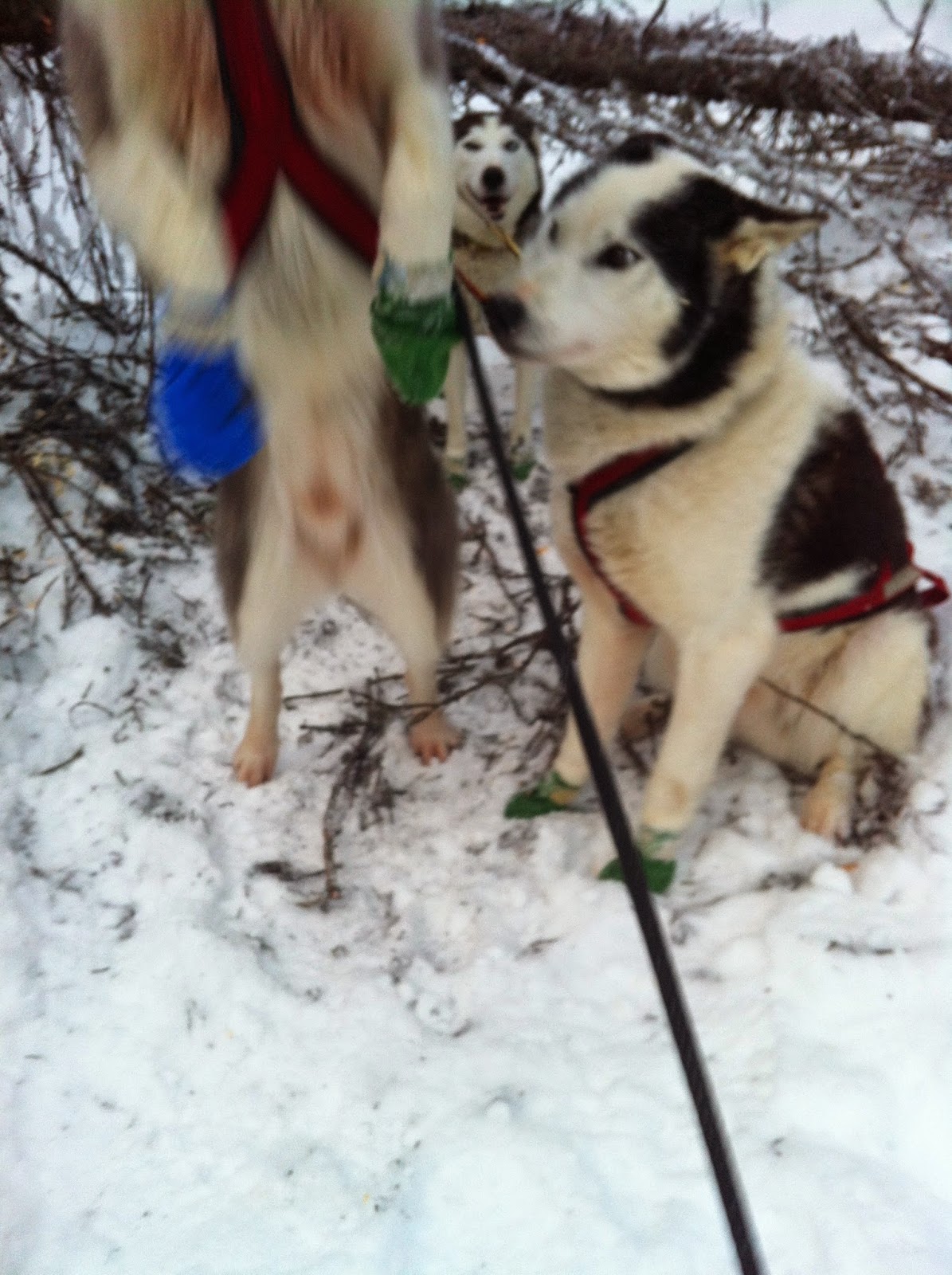 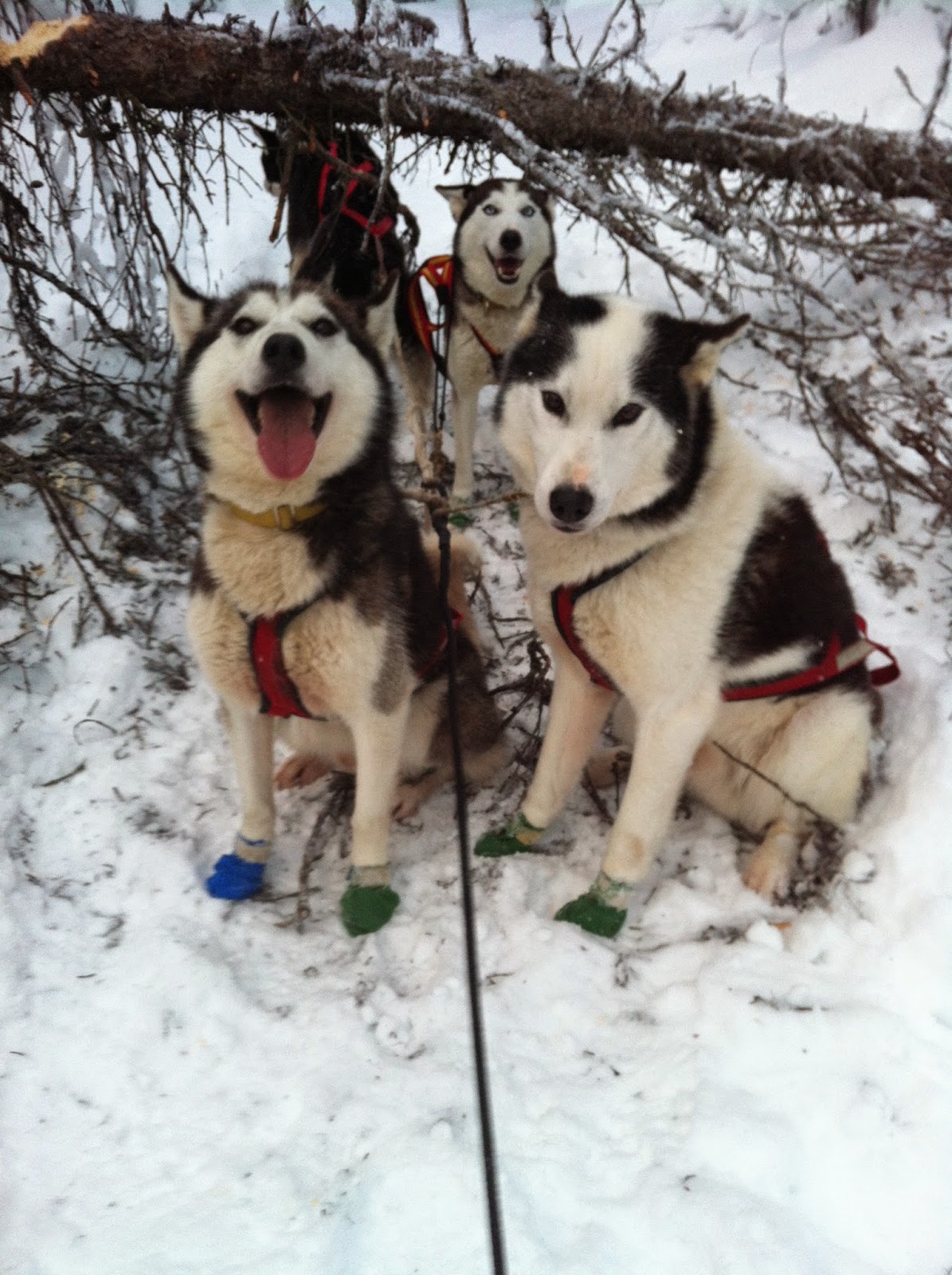 New addition to the webshop.... tank tops ! There is still a short bit of summer left here in Alaska and as winter comes to the north, summer heats up in the summer hemisphere so....  keep cool, look good and support the team in our journey towards Iditarod 2015 !   Thanks for your support ! xx 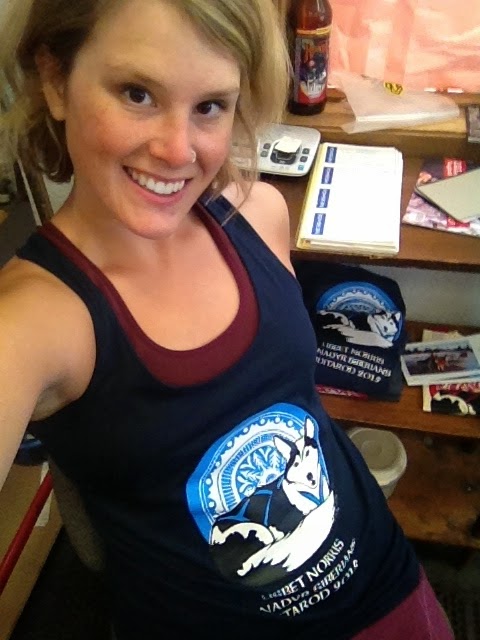 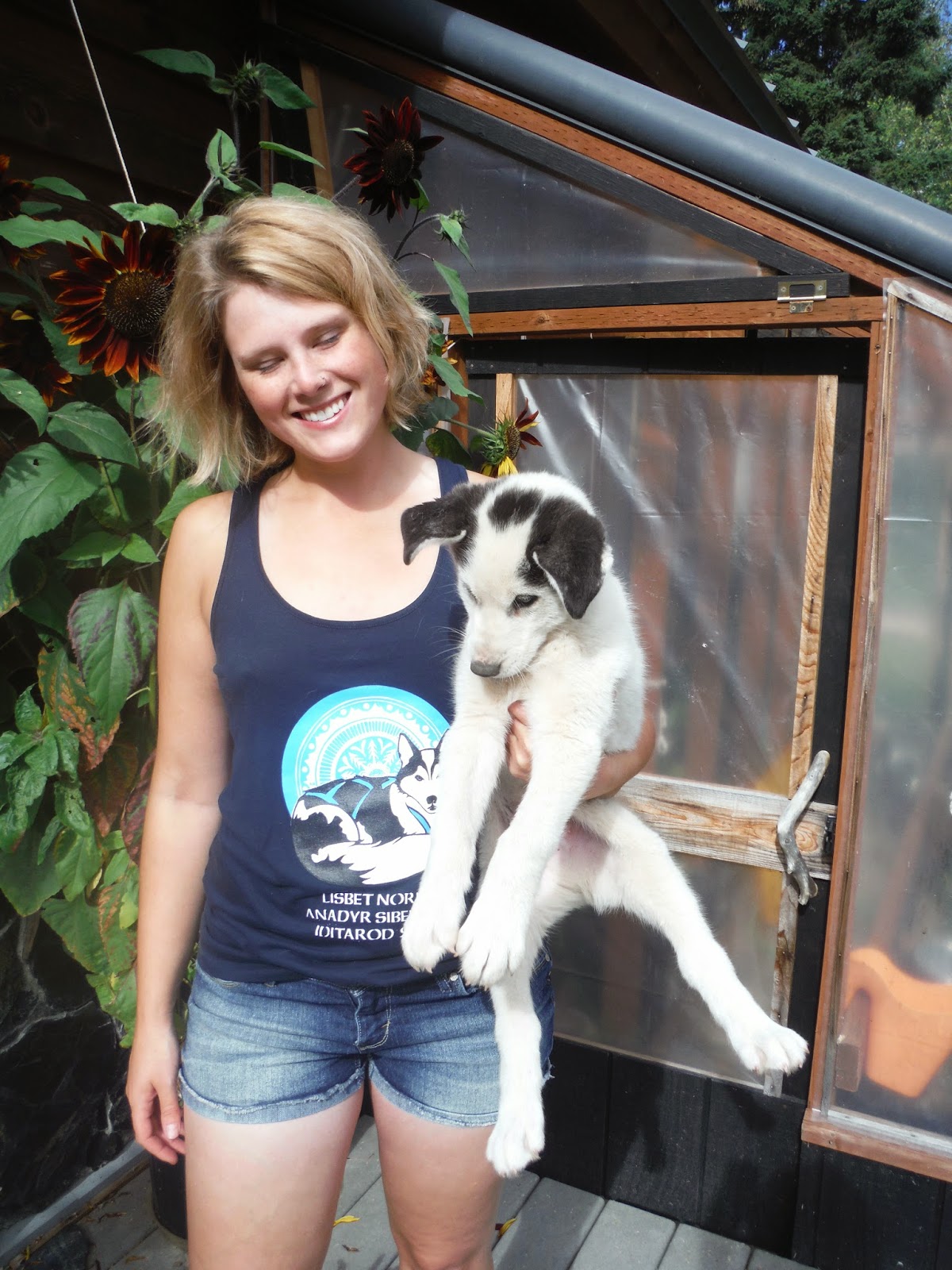 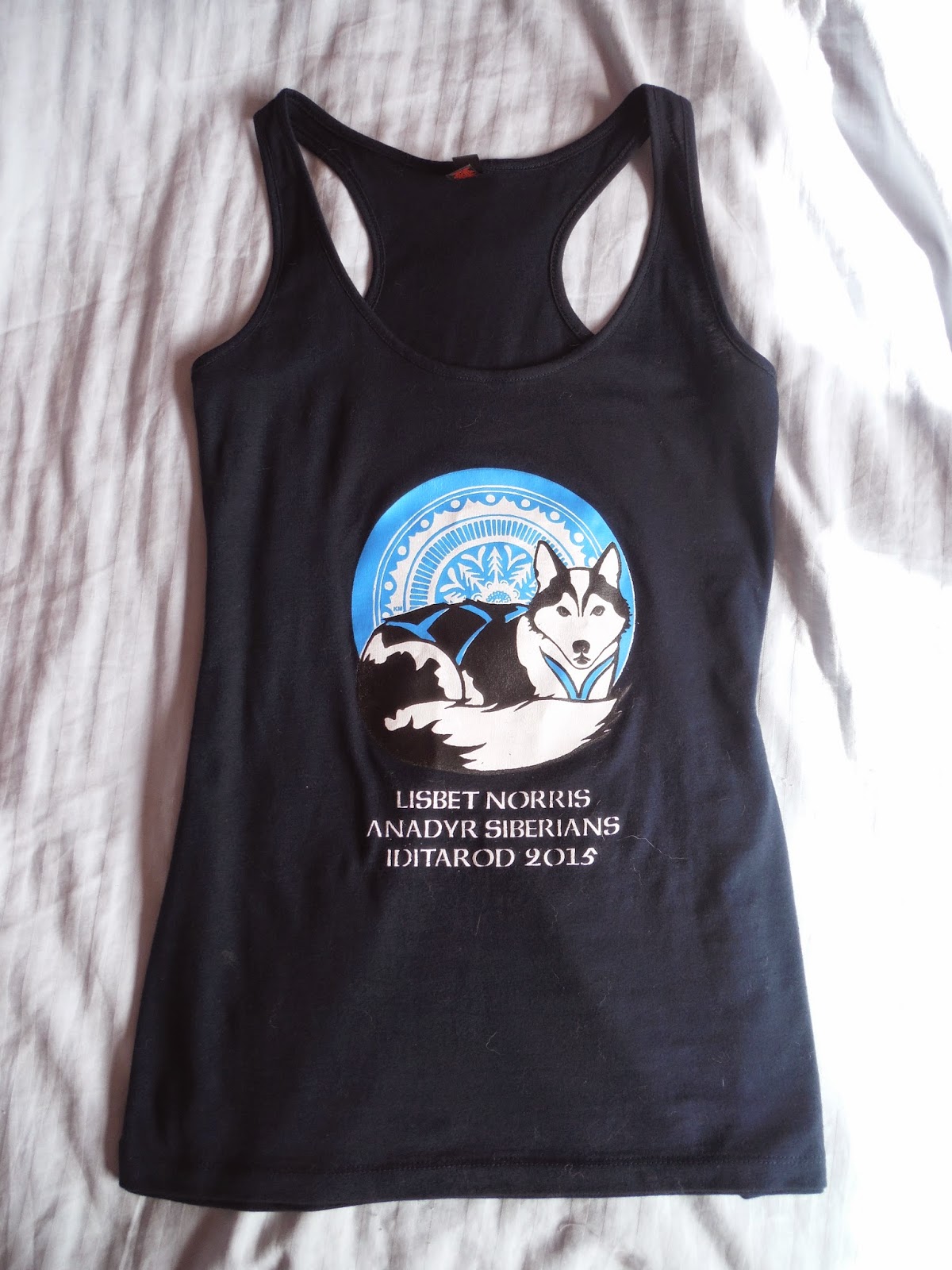 
Leaving Tin Creek, we wound through dusty hills still bereft of snow. At this point, the dogs were still running on their necklines. Conditions were marginally better than before, but still not great. The turns were sharp and icy, my headlight illuminating odd stumps and trees sticking out at irregular intervals. I expected the worst around every narrow corner and the ride was tense. All of a sudden we dropped down onto a flat expanse of untracked snow. It was Farewell Lake! And it was so…. SMOOTH. I cannot even begin to describe the feeling of pure, sweet, relief to be on level ground. I felt like kissing the lake ice. The trail reflectors stretched far out ahead, glinting clearly. I relaxed for the first time in who-knows-how many hours, so thankful for this respite from the trail. We hopped from lake to lake and then into a different sort of terrain, traveling through sparse woods and up and down several steep ridges. The trail straightened and dropped into an open clearing. I swept my headlight around and saw Alex bedding down his team at the end of the clearing. We had arrived at the Buffalo Camp! It was time to take a well deserved rest.

At this point, I have to mention what a fantastic traveling partner Alex is. This is what it’s like: running a fast puppy team, he invariably arrives at camp before you, promptly lights a roaring fire, and greets you with a giant smile. Although….. I can’t recall him smiling right off the bat at the Buffalo Camp. I think he felt like shit, like me. My body ached like hell from being banged around on the back of the sled for the last thirty something miles. My back spasmed each time I bent over to care for the dogs. Grimacing, tired, and sore, I bedded the dogs down for the night and headed for the shack.

Alex had somehow used his magic camp leader skills to transform a ragged shack with no door at into a somewhat cozy rest stop. There was no door, but he had tacked up a blue tarp to help keep the heat in. The fire was roaring and it felt delightful. I hung up my outerwear and looked at my options for bunking. Well, there was no bunk. But there were a few counters. I spread my sleeping pad and bag on the counter closest the fire. There was no way Alex ever would have been able to comfortably fit on the counter, so I didn't feel too bad about securing the primo sleeping spot for myself.

I was completely physically exhausted and the tenseness that had built up during the harrowing trip from Rohn did not leave my muscles willingly. As the kinks in my back began to flatten out, my back spasmed badly. My legs, curled to fit the confines of the counter, were cramping as well. My body was rebelling against rest and I wanted nothing more than a nap! I managed to maneuver into a semi-comfortable position that allowed me to stretch out my legs and fell asleep. I woke to the sounds of Christian entering the shack, but my body had finally relaxed and I was too tired to pay attention to the boys' conversation. Through my haze of sleep, I gathered he was aiming to get back on his competitive schedule. Christian stayed for a few short hours and was gone again by the time I woke up from my nap.

I woke at daybreak, feeling relatively fresh. In the soft blue light of morning, the events of the previous night seemed like a surreal nightmare. As Alex and I readied our teams for the next leg, Yvonne’t team came cruising through the clearing. She had made it! Hooray! The trail behind was so harrowing, it was a relief to see one of the teams behind us come along in one piece.

Still unsure if we had made it completely through the “bad parts,” I left the Buffalo Camp with only half the tugs attached but hooked the rest up soon enough as it quickly became apparent trail conditions had improved considerably. There was a skiff of soft snow and the trail was obviously a straight clear cut. We climbed up a couple of steep ridges before topping out on the last and highest ridge. We stopped at the crest of this hill, peering out at the trail that stretched below us, straight and narrow, for as far as the eye could see. The Alaska Range was behind us now; we were entering Alaska’s Interior, famed for extreme temperatures and vast expanses of boreal forest. I felt like I was rejoining the familiar. I harbor a deep love for the Interior and its landscape, nurtured during a five year stint in Fairbanks for university.

We dropped down the steep ridge, headed for Nikolai. The snow was still scarce, mixed with dirt in many spots, but as we drew closer to Nikolai, the amount of snow on the trail gradually increased until we were running on a beautifully hard packed trail. At times, the wind gusted as we crossed over vast bogs, and there were intermittent rough stretches covered in grassy tussocks. After crossing several flat expanses of frozen wetland, we reentered the forest and enjoyed a beautiful, sunny, smooth run thereafter. The trail skipped between birch forests and swamps until we dropped onto the South Fork of the Kuskokwim River. We followed the curving bends of the river for a while before rounding a bend and spotting the village of Nikolai, the first community we’d seen since Willow, nearly 300 miles back down the trail.

The dogs trotted up the riverbank and were warmly greeted by a crowd of villagers. Several people expressed to me how much they appreciated seeing the old type of dog in the race and that they used to have such dogs themselves. A few people had known my grandfather and shook my hand, congratulating me on making it this far, saying I would surely be making my grandfather proud if he were still around. This was quite touching and very much appreciated on my part. I did not know my grandfather very well, as he passed away when I was young, but I feel privileged to help carry on his passion and life work.

The village of Nikolai had a wood-fired hot water heater sitting right next to the parking area for the convenience of the mushers. It was luke-warm and although I had been warned before the race to boil the river water at Nikolai for fear of giardia, I decided to take my chances and half-heartedly heated it to “almost boiling,” enough to warm up my food, thaw my drinks, and make two meals for the dogs: one for here and one for the road (as the days played out, it became clear there were no repercussions for my laziness, ha!).

We enjoyed a comfortable rest at Nikolai. I had sent out a change of base layers to the checkpoint on the advice of DeeDee Jonrowe, who had warned me the run to Nikolai would be hard work and likely to leave one sweaty. So I had lovely fresh clothes to slip into before I retired to the school’s boiler room, which had been set up as a musher sleeping area. The room was secluded, warm and quiet. Soft, comfortable gym pads had been spread out on the floor. It was at this point that I changed into the hand knit wool socks I had received before the race from Su Fields. They stayed on until Nome. They were so warm and comfortable; especially layered over a pair or two of the hiking socks provided by Scott & Janet. Thanks friends, for warm feet !

As I was settling in, Ralph Johannessen came in to lie down. He had cracked a rib or two somewhere between Rainy Pass and Farewell Lake. “Ooof — there is no comfortable way to lay,” he told me in Norwegian. Poor man. My heart went out to him; there is really nothing you can do for a broken rib. I settled in for a short nap — the dogs and I didn't need to stay too long…. our big 24 hour rest was coming up next !!

Missed the first few installments of my Iditarod story? 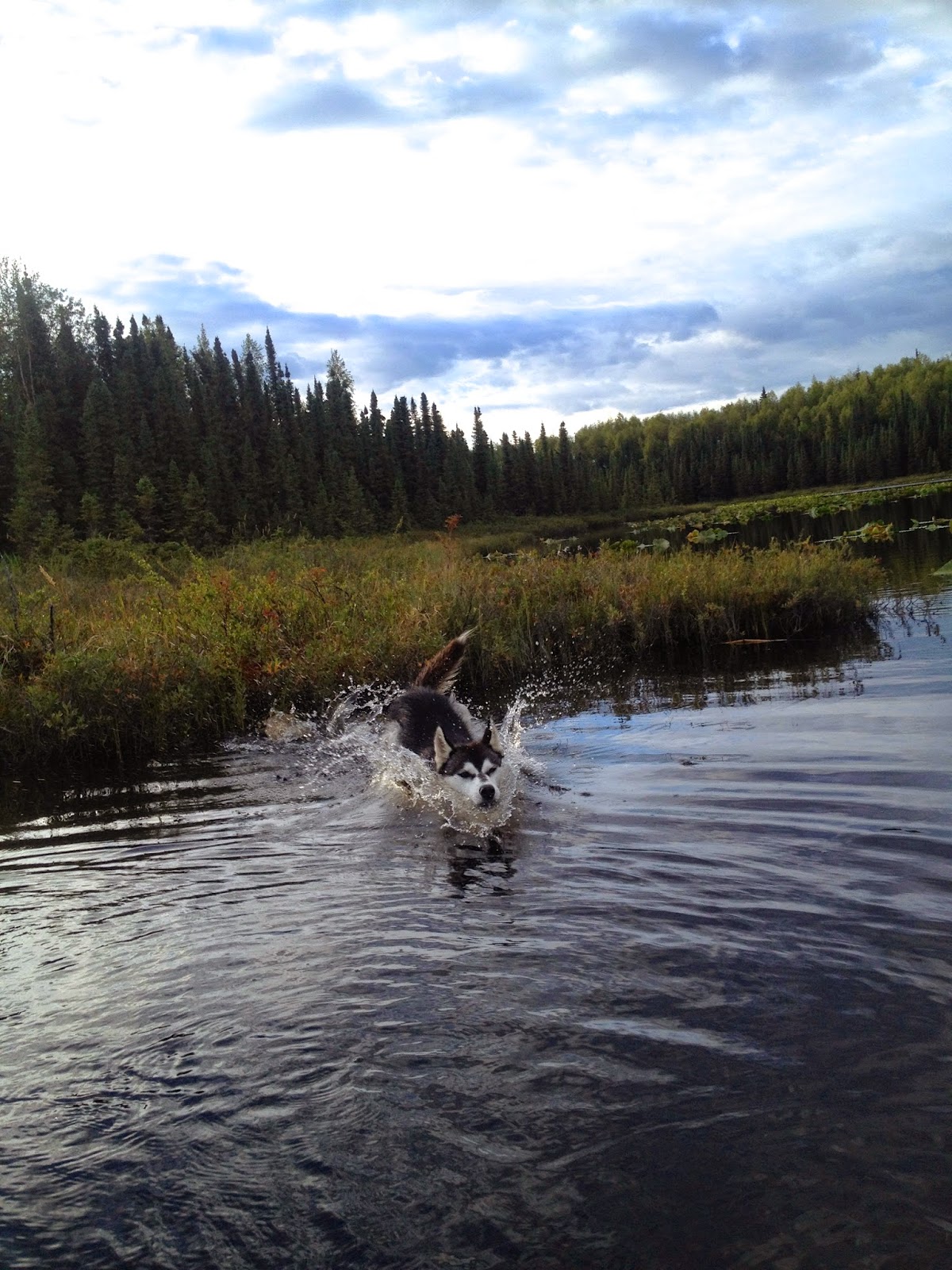 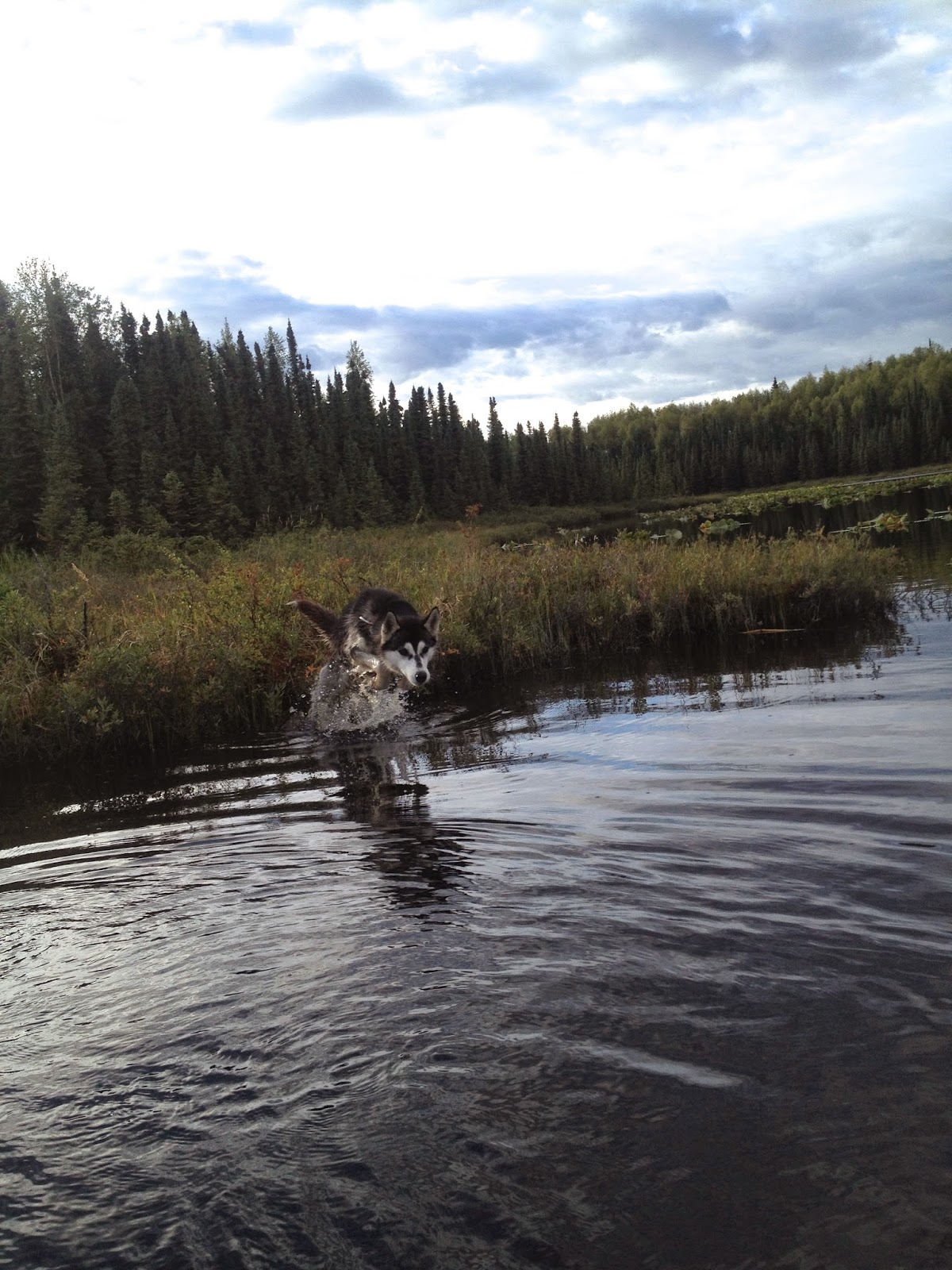 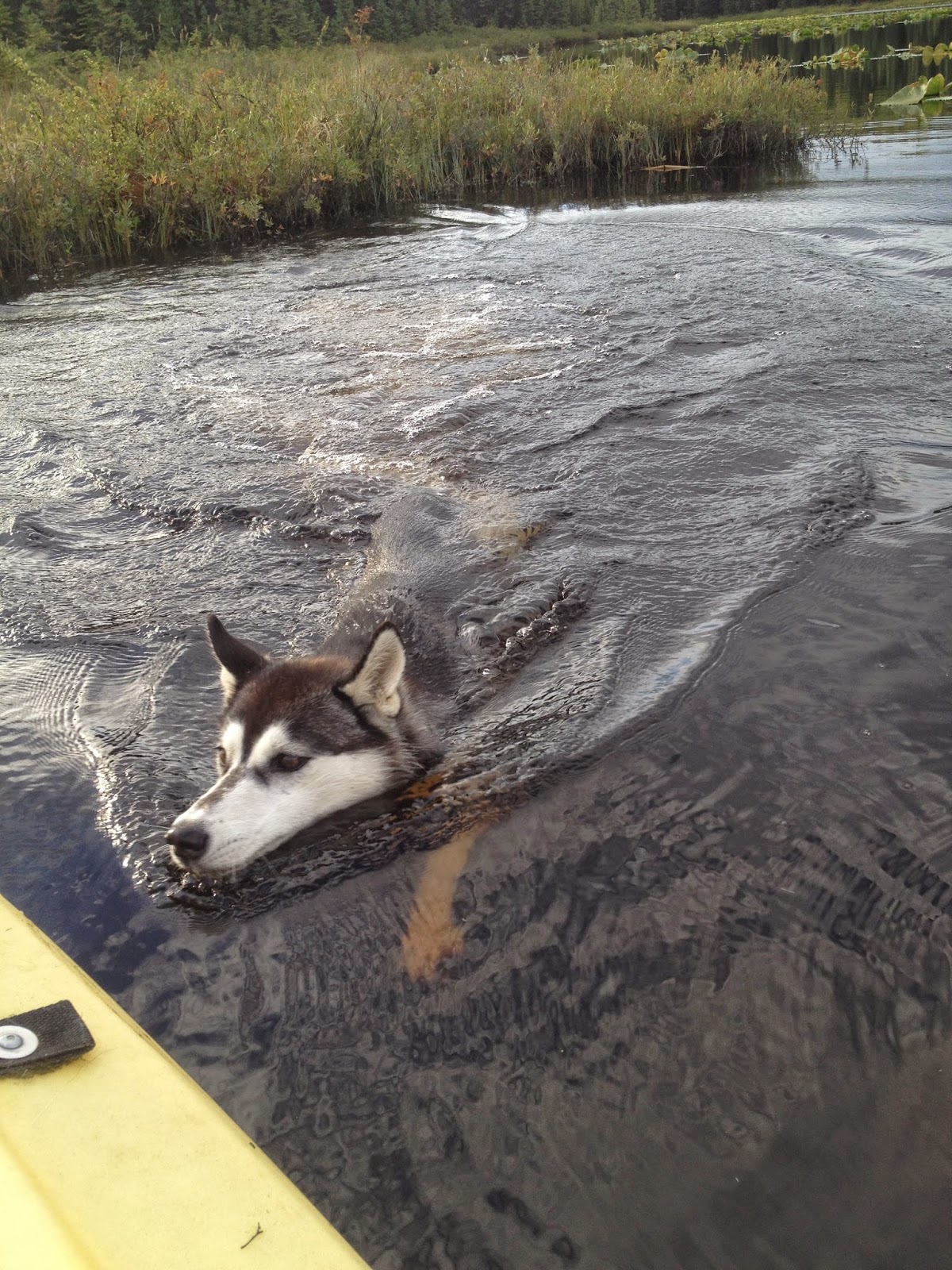 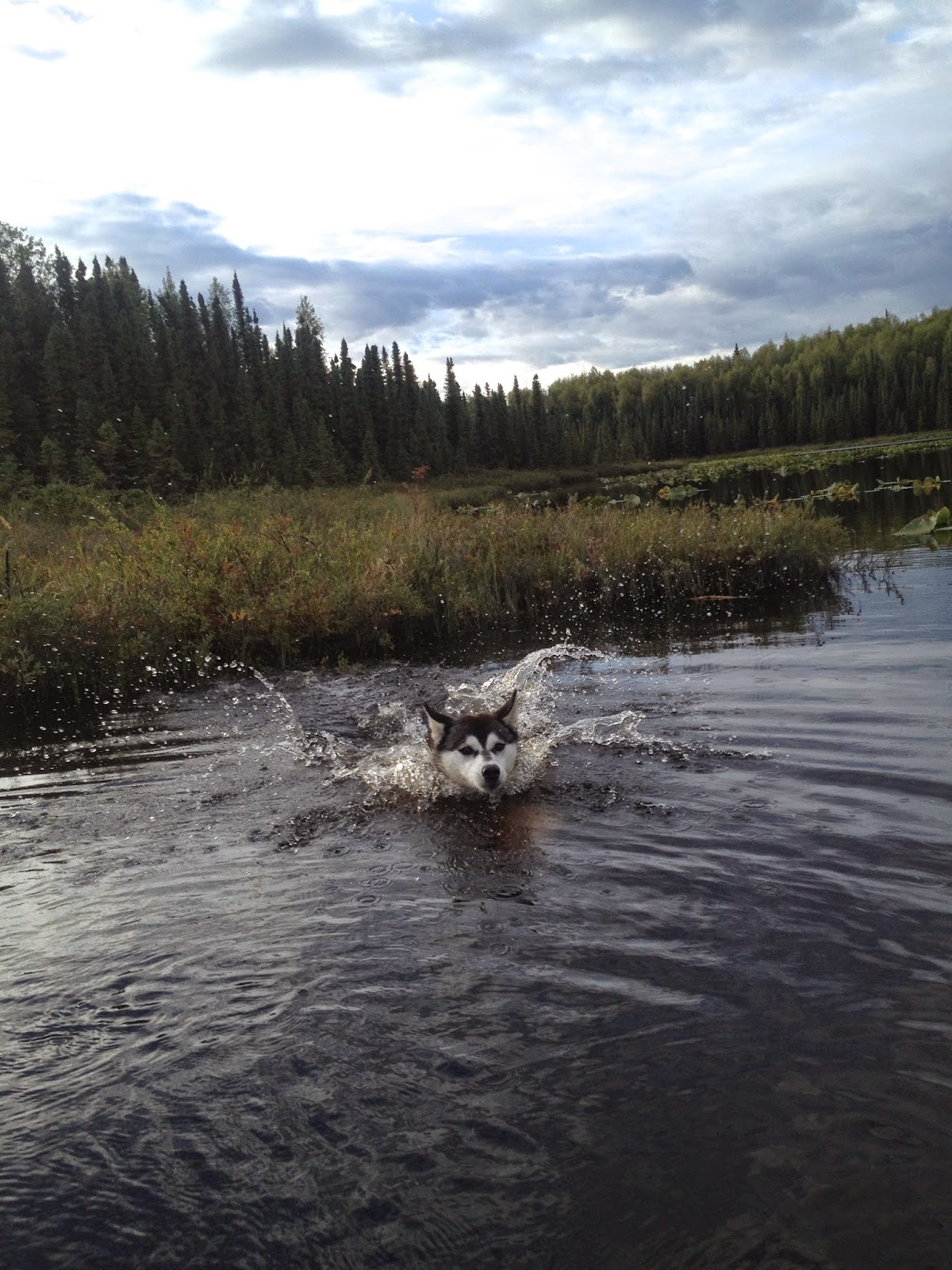