just letting everyone know i´m in valencia and still alive. staying in a youth hostel tonight, and tomorrow with a CS. It´s hot here 22 + . Tomorrow: the beach :D

barcelona and the beach

having a great time in barcelona! enjoying the sun (20+), sand, palm trees, and flowers. i've been riding around the city by bike, drinking lemon beers on the beach, walking a fat black lab around neighborhoods filled with boxed window flowers, restuarants, and people pushing their babies around.
i've been taking pictures, but they don't capture the air around you, or the warmth :(
tomorrow i am going to do some more sightseeing, some postcard writing, and maybe eat some tapas. food is cheap here! no plain pasta this week!
Posted by Lisbet at 2:21 PM 4 comments:

the chuck norris of norway

Posted by Lisbet at 2:46 PM No comments:

sun on our face, wind at our back

So said Besta (in norwegian), when we went for our ski yesterday. It is so beautiful here in Vågå during Påsketid! There is masses of snow here, probably almost 2 meters. It has been blowing hard though, enough to drift in the road that Onkel Kåre has plowed with his tractor up to Besta's.
My trip to Spain is coming together. I've spent all day at the computer putting in requests on couchsurfing.com and looking at bus and tog schedules. I'm planning on seeing Girona, Barcelona, and Valencia. I'm pretty sure I have places to stay the entire trip, just waiting for some confirmations. :)
Planning for this trip is just whetting my appetite for more travels. Besta and I played Idiot with a set of cards Guro brought back from North Carolina, and now I want to drive/bike the Blue Ridge Parkway which was featured on the front/back of the playing cards. I've put that down on my list alongside seeing Arizona, New York, the prarie, and Maine. And that's just within the U.S...
My UA Scholars is tying me to Alaska for the next few years, but that's not such a bad place to be either. I'm thinking about taking another exchange option, but I'll have to see how that's fits into my plans for a degree. I guess the first step is picking a degree... (northern studies, history, anthropology, geography???)
God Påske! On the schedule for tomorrow: a ski tour, åsne, and a visit to ingrid og jorid
Posted by Lisbet at 9:40 AM 1 comment: "the best way to learn norwegian without going to class, and besides talking to norwegians is most likely odd nordstoga."
-guro
Posted by Lisbet at 12:20 PM No comments: 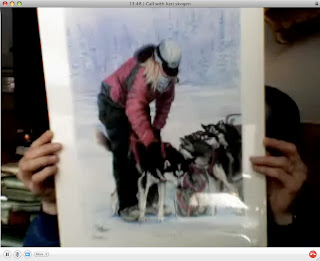 DAVE TOTTEN
Posted by Lisbet at 2:40 PM No comments: