From the start line on Willow Lake, the dogs churned though the torn-up trail left behind by the thirty-nine mushers that preceded me. The miles flew by, familiar trail punctuated by groups of cheering fans. We dropped onto the river in no time at all and spent the next couple hours enjoying the blue skies and warm sunshine of early spring. The sun had set by the time I reached Yentna. We blew through, pausing only to sign a handful of posters. Although I would have loved to stop for one of my beloved Yentna Station cheeseburgers, I wanted to keep going for another ten miles before camping with the dogs. After an hour, we found a relatively private pull-off behind a wooded sand bar. I fed the dogs and discovered, after all my preparation, I had neglected to pack food for myself for the first seventy miles of the race. Oops. Rookie mistake #2. I had plenty of snacks, but I would need to stop and feed myself in Skwentna, something I hadn't planned on. No big deal. I wasn’t racing. In fact, I didn’t even have a schedule.

I went into the race with a hazy idea of a twelve day race, a copy of the race rules, and a copy of Mikhail Telpin’s schedule from last year’s southern route. This still makes me laugh just thinking about it. However, I knew if the Chukchi dogs could do the race in twelve days, so could I. In retrospect, this was one of the best decisions I could have made for my rookie race, especially during a year in which the conditions were so unpredictably varied. I was able to adjust fluidly, with no consultation with a piece of paper, just an eye on the dogs and the weather. This resulted in very little stress on my part in regards to a “schedule.” I’m so glad I did it that way. What happened was that I fell into a group of people with comparable traveling speeds. Monica Zappa (who I traveled with from Rohn all the way to Nome) and Alex Beutow (who was with us until Kaltag, where he started cutting rest and roared away with his nice-looking Berkowitz puppy team) were both a bit faster than me, so I just took as much rest as I could get away with and still keep up with them.

However, sitting on the sand bar outside of Yentna, I hadn’t yet fallen into the run/rest groove that was to set in a couple hundred miles further down the trail. I was beset with uncertainty about how long to rest the dogs, where to rest them, how much to feed, and just generally feeling like I had no idea what I was doing. But I was also excited, thinking about how I was actually running Iditarod (!). I leaned back against my sled and looked downriver, watching the stream of headlights cruise steadily past my secret spot. The only team that followed my tracks was Alex, who of course managed to time it so that I barely had time to pull up my pants from taking a pee before his floodlight of a headlight lit up my camping spot. Typical. Once Alex had passed through, the teams started to peter out; either camped in Yentna or on their way to Skwentna. The night was clear; the starts twinkled and the northern lights came out. I tried to take a nap but was too excited to sleep. The thought that I was running Iditarod was thrilling, but had not quite clicked; the trail was still too familiar. I was looking forward to the trail beyond Finger Lake; for me, untracked territory.

In Skwentna, I bedded down the dogs and fed them a quick meal while the main reason I didn’t mind stopping in Skwentna, my friend Kristin Bacon, watched on. Kristin is planning on running the 2016 Iditarod and will be completing her qualifiers this season. Kristin has volunteered with the famed “Skwentna Sweeties” for the past several years, helping run the checkpoint and feed the mushers. After a quick bite to eat, I geared up, pulled the hook and let the team cruise into the big Skwentna Swamp in the early dawn light. I love the Skwentna swamp; the last time we traveled through was on the 2013 Northern Lights 300. At that time, there was an almost full moon and it was dead quiet. Frost sparkled everywhere. It was -40 F and we ran by the light of the moon. This time around, it was at least 50 degrees warmer, but still clear and beautiful in the early blue light of morning. The sun rose, and it got warm, but it didn’t slow the dogs down any. Everything glittered in the sun. The trail was very hard, and due to the recent thaw-freeze cycle right before the race, the surrounding snow had a thick crust capable of supporting a full grown man. You could travel anywhere, as evident by Alex’s Beutow’s (a full grown man) beautiful camp outside of Finger Lake, a hundred yards off the trail behind a pretty little spruce grove.

Late morning, we pulled into Finger Lake and settled down for a seven and a half hour rest. I commiserated with some of the other Rookies camped down on in front of Winter Lake Lodge. The next run to Rainy Pass contained the Happy River Steps and is known to be quite technical and difficult. There was nothing the veterans still camped at Finger Lake could say to reassure us, except maybe “put your helmet on.” We’d either make it down fine or not. 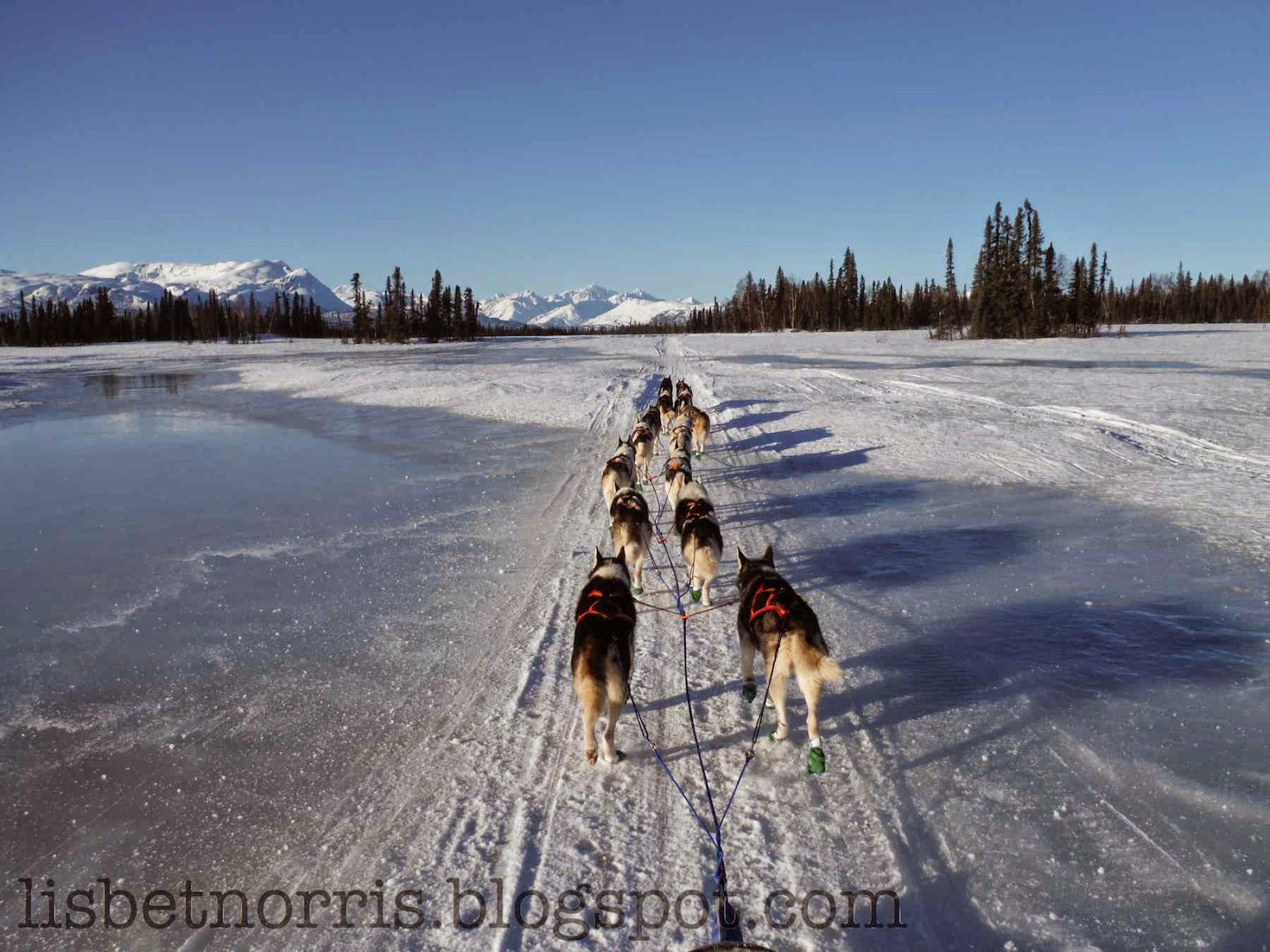