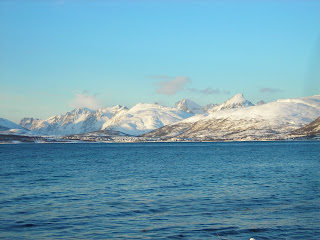 A lot has happened in the week and a half since I last posted.  I have been filling my time with all sorts of productive activities...

Climbing
The student gym at the university has a great climbing wall. The wall at UAF completely pales in comparison. I took the test to get my climbing certificate and failed because I learned a different way of belaying than is standard in Norway. My climbing instructor at UAF is a great person, but in our class he was pretty lax about safety, which can have pretty disastrous consequences...
In order to climb here, you either have to have your own gear (rope, belt, belay loop, beaner, etc.) or rent it from the gym. Luckily, I have a friend or two who have their own ropes :) and I brought my belt and shoes over. There are no top ropes set up, so one has to lead climb, which I think really pushes you, both mentally and physically, to progress as a climber. I'm pretty weak, but I'm climbing regularly and really loving it.
Working
i.e. running dogs under the northern lights, eating great food, snuggling with puppies and soft reindeer hides, being social, and being outside all day.
Getting into my schoolwork
I'm starting to catch up on all of the reading I neglected for the first three weeks of school. I don't think I've mentioned it before, but for those who don't know the three/four classes I am taking are:
1. International Political Economy
2. The Sami Nation
3. Indigenous Religions
4. Norskkurs (sometimes)
None of the lectures I am having are really scintillating, especially Norwegian, where we are forced to discuss in groups things like "barneoppdragelse" and "skilsmisse." Childraising and divorce. It's hard to discuss something in which I have no experience/interest and discuss it with other people who barely speak Norwegian and are equally bored. Rather than go to norskkurs, I'm trying to find EKTE Norwegians with whom I can pratar med. Working great so far, I called my mother...
My other classes are going good, my main challenge is trying to correlate the lectures with the reading.
Friends
I have made so many friends here, from my Polish beauties to the few great nordmenn who have the patience å prate norsk med meg.  Tromsø really is an international city.
It was my birthday last week, and it was wonderful! I got the most lovely birthday wishes from everyone I knew.
I had three couchsurfers that day as well. :D I had been planning on going to the pub that night, but was leaving the where and the when to a couple of friends.

By 1o o'clock that night, I hadn't heard anything and was sitting at home with my couchsurfers wondering what was going on when I finally got a call. "Aren't you coming?" It seems everyone had told everyone but me what was going on, and nearly all of the people I knew in Tromsø were sitting at a bar waiting for me...   So lickety-split my couchsurfers and I walked down to the sentrum where I was met with a birthday feather boa, cake, singing, dancing and fantastic friends!
This weekend, I went to the wedding party of two amazing people, Trond and Maria. I don't want to jinx them, but they seem perfect for each other. Looking at them together gives me, a cat-lady spinster at heart, hope I might find someone who fits me as well as they complement each other. Congratulations to them! The wedding party was fantastic, full of lots of great people, moving speeches by bride, groom and bestman, two incredible yoiks by Ande Somby, and masses of great CRAZY dancing!
Posted by Lisbet at 10:54 AM 1 comment:

This past Sunday, I went down to the city center with Alina and Kamila to watch the Norwegian Championship in reindeer racing. They closed down the main pedestrian street and covered it with snow in order to hold the races. Unfortunately, they were charging 50-100 NOK to stand next to the fence, so I found a vantage point a little farther away. Can you imagine someone charging to see the Iditarod or Fur Rondy?
The racers had one reindeer each pulling them on skis, there were two racers at a time. It took only about 16 seconds for the reindeer to run the length of the main street! The announcer said that reindeer can reach speeds up to 70 kmh/43 mph!
It was raining and blowing, so we only stayed for a few sets, as they had 5-8 minute intervals between each start, we were getting cold and Kamila was bored. But if you put aside the rain, cold, and fines, it was pretty awesome!
Posted by Lisbet at 5:54 AM 1 comment: 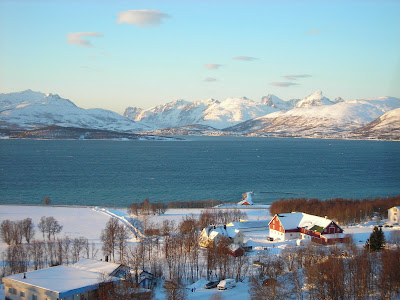 It was wonderful to see the sun in tromsø the other day, but today the fields by the sea are green... all the snow has been rained away :(
Posted by Lisbet at 5:49 AM No comments: