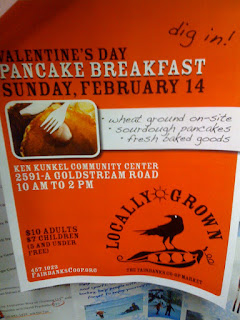 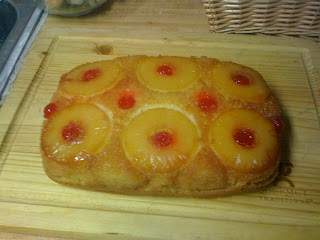 pineapple upside down cake that i 100% expected to fall out of the pan in a heap. nice surprise. we also had a lovely dinner and bottle of wine.
Posted by Lisbet at 2:04 PM No comments:

*capture stories (to share with friends/family and help myself remember what a lucky life i lead.)

*writing is good for the soul, articulation is sometimes as important as excercise.

NARCISSISM in the blogosphere....... try and avoid the day by day details because, while you can be writing for yourself, you are generally writing for a public and NO ONE CARES WHAT ERRANDS YOU DID TODAY. tell me something i care about. something exciting or something juicy or something thoughtful.

this means no shower, no kitchen tap, no flushing toilet.

but humans are adaptable creatures.

when adrienne and i moved into our cabin by the river, i think we showered almost every day. it was just another block of time, another errand, another line on your schedule. but it was still a hassle, an extra stop before class.

but over time you just don’t mind being as greasy as much as you used to. the days between showers begin to stretch out, it’s not neccessary. it’s a different lifestyle, one without much style, i guess. my lifestyle. i’m sure there are a few people who still blowdry and crimp and primp and gel and style their hair while occupying a cabin. taking a shower isn’t a neccessary chore anymore. it’s a treat. on rare occasions, i treat myself to a $4 shower at B&C laundromat, where they clean the showers after every use and i can shower without my crocs on. but mostly i use the wood center showers, where shoes are mandatory and i avoid touching anything that is not my own. they’re old, dark, and usually dirty. i’ve seen a little girl throw up into the shower i was about to use. i used the other one instead.

The university is cabin friendly. The wood center offers three women’s showers; almost every building on campus contains a shower or two in its bowels for students and employees. The IARC building, by far the nicest building on campus has a commuter room for its employees, with lockers, showers, and ski racks provided.

washing dishes....i keep my water in 5 gallon coleman jugs, heat dishwater on the stove and wash my dishes in the sink. the sink drains into a so-called "slop bucket" which is emptied outside when it gets full. Due to this, and the fact that I have to go out of my way to get water (a free pump at a spring in Fox), I try not to waste it.

outhouses.... outhouses can be deceptive.... the worst are those with actual toilet seats, you will freeze your bottom on the terribly cold plastic or porcalin. Wait, no, the worst outhouse is actually the one we built behind our cabin in willow with the square hole cut out of plywood. 1) you could get splinters and 2) i was convinced something was living in the hole. so that one was the worst. but after that are outhouses with real seats, hard plastic, porcalin, or those covered in the horrible crinkly plastic toilet seats that crack and seem undeniably dirty. The best seats are covered in a firm layer of blue styrofoam. Styrofoam, while probably damaging to the environment, is wonderful on your bottom. It never feels cold, always warm and is less likely to frost up than other materials. Perpetually warm, easy to wipe down and disinfect, and easy to replace.

Last weekend I skied out to Colorado Ck Cabin with friends: Oliver, Brittany, and their friend Jeff(?). First ski trip of the year to one of the few White Mt. cabins I haven't yet visited. Lovely lovely ski... the 14 miles were initially intimidating... but the trail was mostly flat. Slight uphills and one small push up a ridge towards the end. We didn't leave the trailhead until around 6pm so had the pleasure of skiing under the open ski with a white bright moon beaming over us. Barely used the headlamp. I opted to turn it on going down the hills, Oliver and Jeff did not, we all did just fine. Minimal snow on the trail, lots of grass tussocks poking through, other parts severely windblown, but with a thick firm crust on top.

We followed a set of wolf tracks for many miles. Big paws, as large as my hand. It was a long ski, but with plenty of snack and water breaks. We took a long lunch, lounging by the small fire we built in the burn. The last couple of hours was a zombie ski. I was tired; it was way past my bedtime.The moon was clear, hanging over the ridge directly to our right. I moved along steadily, completely fascinated by the shadows of the dead trees crossing the trail. The shadows were so crisp, you could hardly tell the trees from their shadows.

There is a sign giving milages .25 miles from the cabin. I had a second wind and skated fast, on my way to a warm bunk (I had planned to sleep outside, but it's not as fun by yourself + windy). It was 0 degrees F inside and out, but I had my good sleeping bag, my puffy pants, my reindeer skin inside my bag, and two pairs of wools socks with fresh toe warmers in between. So I was cozy...... until I woke up at 4 or 5am panicking I was so hot. The boys had built a fire for the morning before they went to bed, but just HAD to light it on fire.... the cabin was probably 80+ in only a few hours, with minimal wood. the stoves in the BLM cabins are v. efficient, it was still cozy warm in the morning. that was nice, but it was miserable hot in the meantime. i wonder if they learned their lesson....Oliver was sleeping in the loft which must have been a sauna....literally...there was a pot of water boiling on the stove all night.

Saturday was sunny. Brittany and I explored the lake in front of the cabin and the ridge behind it. We picked up on the wolf tracks again until they disappeared toward the top of the severely windblown ridge. A flock of ptarmigan whooshed over the ridge in front of us. It was terribly windy, so we went back to the cabin for tea and chocolate. Saturday night, Chris and Corrina joined us. It was lovely to have them. I made a no bake cherry cheesecake that we all enjoyed; yum.

The ski back was lovely. It started in the morning with mist over the hills. The mist burnt up in the sun, but left all the trees frosty and glittering. The ski out took us only 6hrs, including break stops and another long lunch. The trail was for the most part slightly downhill and flat all the way back, much more than I realized skiing in. I remember skiing along a windblown ridge thinking that this snow was strange, with hardly any glide.....actually, that was gravity. Nice smooth ski all the way back (It took us about 8hrs to ski in, a little slow but comfortable). It was colder than we realized, -18F at the trailhead. I sat down on my skin and changed my socks immediately, putting in toe warmers and my Nuptses. We stopped at Hilltop for pie/cheeseburgers/halibut on the way back home. I still didn't make it back in time to catch a shower. 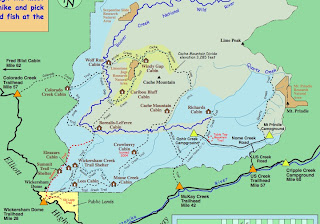