A 30-mile loop that travels mostly on top of ridgelines, Chena Dome was my second multiday backpacking trip in the Fairbanks area in 4 years. Although I prefer ski trips ( less chance of snapping an ankle...) it was a beautiful trip. Thirty miles of previously unseen Fairbanks terrain has given me a whole new appreciation for where I live... in just thirty miles we trekked through several wildly different landscapes. Soft tundra, rocky tundra, alpine fields, bushy saddles, burn, berry carpets, perfect little pines and tumbled rock descents. As we walked through each little microsystem, we were surrounded by the blue rolling hills so characteristic of interior Alaska, with the white peaks of the Alaska Range exposed in the background. Beautiful, sunny weather all three days... hot enough that I worried about the dogs overheating, they were both working so hard.
Chena Dome Trail has an unfortunate alias: Chena "Doom." Water can be scarce up in the hills/Fairbanks mountains/domes (the latter seems to be the proper Fairbanks name for v. big hills/mini mts...) My hiking partner Allison had some friends who attempted the trail (maybe last year) but couldn't find any water at all and had to turn around. Luckily, we hit all the water spots outlined on the trail guide (the pools anyway, no streams) on our trek
We saw wildlife... a wolverine trundled across the soft tundra saddle we camped in the first night, a moose followed his tracks the next morning. Small birds flitted around us up on the ridges, a couple ravens soared on the thermals coming up from the valleys, and the dogs flushed out a flock of mottled brown and white ptarmigan.
The berries! I've never seen so many berries. Fat, ripe blueberries as large as dimes dripping from red bushes, higher up, vast carpets of krekling (crowberries?) and lowbush cranberries. I sat and had handfuls of berries with my chocolate or trail mix. We had berries in our oatmeal and berries for dessert. Organic energy, natural sugars ... so good!
The downfall of my trip was my feet. I ripped them apart with my poor choice of footwear... tennis shoes instead of good firm hiking boots. I forgot my boots in Willow and figured I'd be okay with my Nikes.... will never make that mistake again. Now I know the reasoning for hard, firm soles on hiking boots first hand. I could barely walk the last day, my blisters were huge. What saved me was the terrain, a nice firm trail that I could tread on in expectant pain, unlike the rocky tundra that poked at me through my shoes in random spots.
The dogs were the shining stars of the weekend. At the same time, they provided unwelcome, scary adventure. Tuffy and Nitsii worked hard, hauling their own food and water + some of my stuff (sleeping bag, down jakke). The night before we left, I devised a summer pulk for Tuffy, a kiddie sled that I poked holes in and attached rope to. See picture. The sled was light enough I could pick it up and put it on my hip when we went up a really steep rocky part, so Tuffy wasn't too burdened down. When the sled worked, it worked great. When it didn't, it really didn't. Tuffy pulled hard, especially if someone was ahead of him, particularly the other dog. Going downhill, the rope between Tuffy and I (which had bungee in it) would stretch between us and levitate the sled which would promptly tip over and scrape upside down on the rocks. My duck tape failed after a few tips, ripping off and dumping the contents along the mountainside. I worked on the summer pulk a lot, switching the lines around, super-ducktaping the contents inside, etc. What the pulk really needed was some PVC pipes to keep the sled from running up on Tuffy (although we got pretty good at traversing down the hills). Allison and I hooked up a system using Nitsii's leash that amounted to lining the sled down the hills, similar to lining a canoe up a river. The last day, to give me and my feet a break, Sylvain, Allison's French friend who was hiking with us just took Tuffy and walked with him the final 12 miles, which was mostly downhill (and thus killer on my poor blisters). I felt like an idiot dragging my empty kiddie sled around. Just needs some tweaking.
Also on the last day, the dogs gave us a terrible fright. This is how it started: Tuffy and Nitsii were super best friends on the trail. Tuffy LOVES Nitsii. All he wanted to do was hump on her all weekend. They would play with each other at every stop. It was nice to see Tuffy have some dog company. He's been lonely up in Fairbanks by himself (Mamacat's not very nice company). On the last day, Allison and I thought we could give both myself and Tuffy a break by tying him up to Nitsii. I had reservations about this idea from the start, afraid that Tuffy would take off, take Nitsii with him, and disappear forever. And sure enough, that's what happened (with a happy ending though). Nitsii was supposed to be our safeguard, because she stops and waits for you on the trail and comes when she's called. Nitsii's a lab/samoyed mix, Tuffy is mostly siberian husky and can't be trusted off the leash. However, looking at the previous two days, Tuffy seemed like all he wanted to do was follow Nitsii around (and hump her). So we looped Tuffy's leash onto Nitsii's dog pack. Like the summer pulk, it worked great when it did, and terrible went it didn't. Tuffy and Nitsii trotted together nicely on the open, tundra on top of the ridges, happy as clams, stopping and waiting for us. Then we dropped down into a bushy saddle packed with small fir trees.
Posted by Lisbet at 10:04 PM 2 comments: 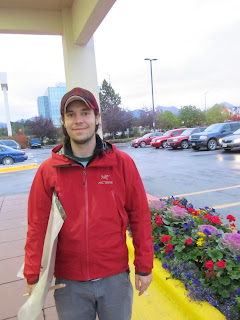 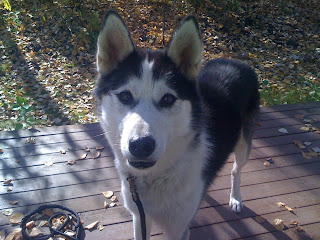 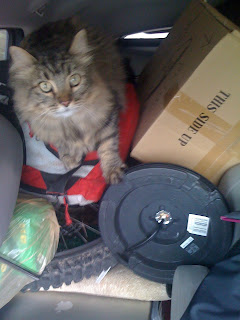