a bit of press 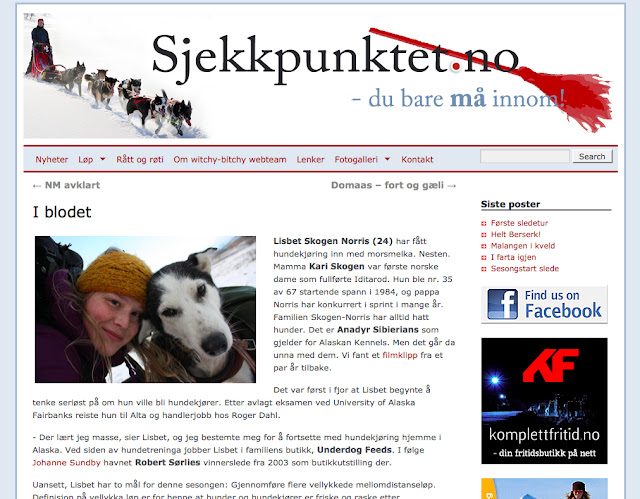 Recently, I was flattered to be featured on the popular Norwegian mushing blog Sjekkpunktet (The Checkpoint). Thanks to Anki Ødegaard, who wrote the article and translated my bad Norwegian to good Norwegian. Below is the barely passable, but funny, Google translation:

Lisbet Skogen Norris (24) has been mushing with mother's milk. Almost. Mom Kari Skogen was the first Norwegian woman who completed the Iditarod. She was No. 35 of 67 teams starting in 1984, and Dad Norris has competed in the sprint for many years. Skogen Norris family has always had dogs. It is Anadyr Sibierians applicable to Alaskan Kennels. But it then goes away with them. We found a movie clip from a few years back.

It was only last year that Lisbet began to think seriously about whether she would be a musher. After graduating from the University of Alaska Fairbanks, she traveled to Alta's job at Roger Dahl.

- There, I learned a lot, says Lisbet, and I decided to continue with the dog racing at home in Alaska. Besides dog training jobs Lisbet in the family store, Underdog Feeds. According to Johanne Sundby landed Robert Sørlie winning lead in 2003 as a store display there.

Anyway, Lisbet has two goals for this season: Conduct several successful middle-distance. Definition of a successful run is for her dogs and mushers are quick and healthy after the finish. The location is secondary. Then she will qualify for the Yukon Quest / Iditarod.

Initially, Lisbet registered Knik 200 and Northern Lights 300 This means that the "mid-distance" over there are long distance at home. And the father of the house is still focused on Fur RONDY.

- It's cool to have teams from the same kennel in both types of races, says Lisbet. I'll have fun in winter, I still have lots to learn, says the relatively fresh musher from Alaska. But she ran thus Pasvik trail in April to 10th before she went home.

In these days learn Lisbet dogs to rest on the track. For they do but little in Fur RONDY. While she waits for harlots. (= Snow) Follow Lisbet on her blog.

Her motto: Life is short, mush dogs!
Posted by Lisbet at 2:22 PM