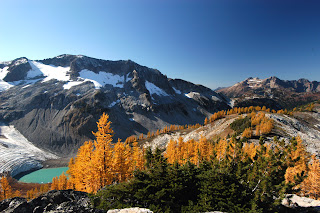 I traveled to Whitehorse Thursday with a Northern Studies contingent for the "Governing Under the Midnight Sun" conference. We took a van all the way down. Whoo! Bumpy! A beautiful drive, minimal wildlife. One moose, one elk, one coyote. I had my eyes peeled for tamarack, a deciduous spruce tree that turns yellow and loses all its leaves in the fall. Saw plenty. Above is a picture from Wikipedia of tamarack trees in Washington (I know it's misleading; the title post says Whitehorse and there's a picture of Washington, but I like it and it's staying). Only one tree looked like that. The others looked like dead spruce....
We passed through customs no problem, in spite of Lars, who disregarded posted signs warning to STAY IN YOUR VEHICLE to offer cranberry drinks to the students in the car ahead of us. The customs officer received a mini lesson on AK state history from Terrence and Mary while the rest of us waited for the bathrooms. I didn't sleep much on the 11hr trip, instead musicked, read, watched some tv on my computer, eyed the icy roads and enjoyed the scenery. Arrived in Whitehorse to check in to a Best Western downtown with a huge queen bed and six pillows to myself. Sharing a room with Brittany Retherford, a v. fine, intellegent person. The group as a whole attended the welcoming reception at an old log church-turned-museum, received our name badges and listened to the opening remarks. Were presented with very nice conference-labeled messenger bags, of which we had a choice of red, blue, or orange. Orange for me. The group then split, with few going back to the hotel and most going out to a pub for beer and food. I had a few beers as I wasn't hungry, having filled myself up with snacks and other assorted goodies from the goodie bag that Lars and Mary were kind enough to make up for the rest of us. From the pub we went back to the hotel and checked out the open mic night in the hotel bar. One more beer and then I was in bed by 11pm AK time.
Up in the morning and appreciating how very nice it is to have a shower at my fingertips...
Posted by Lisbet at 10:53 AM